The Chairman and Members of North Central Area Committee.

Proposal to initiate the procedure for the taking in charge of The Copse, All Hallows, Drumcondra, Dublin 9

A request was received from the owners/occupiers to initiate procedures for the taking in charge of the above estate. It is intended that the roads and footpaths in the estate, as indicated on the attached Drawing No R.M.25706 be taken in charge.

The Planning Department by order G12927 recommends that the formal procedure be initiated to have the development known as The Copse, All Hallows, Drumcondra, Dublin 9 taken in charge by Dublin City Council.

It is recommended that the North Central Area Committee now agree to the initiation of procedure under Section 11 of the Roads Act 1993 as set out in Subsections 4 and 5 of Section 180 Planning and Development Act 2000 to declare the roads and footpaths indicated on Drawing R.M. 25706 to be public roads and footpaths in order that the process can be recommended to the City Council. 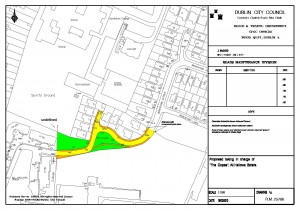